Milan, February 2017 – Announced the winners of PORADA INTERNATIONAL DESIGN AWARD 2016, the contest sponsored by Porada, a leading company from Como in the production of design furniture, and POLI.design, Politecnico di Milano, under the patronage of ADI, the Association for Industrial Design. The jury, gathered on January 27th in the wonderful setting of the eighteenth-century building Palazzo Natta in Como, selected the six winners - three for the Professional category and the same for the Student category - who participated in the call opened during the Design week in Milan. Original and innovative concept of coat hangers, wall-mounted and free-standing coat hooks, equipped or equippable, which convey the values and identity of a leading brand of Italian design like Porada: these were the cornerstones of the competition addressed to Italian and foreign designers and creatives (individuals or teams).

Reserved also two special mentions to the projects Simbiosi by Giacomo Zanella (Italy), for the Student category, and Tulipano by Mariia Surkova and Maksim Nizov (Russia), for the Professional category.

The Swaying Bamboo, the winner for the Professional category, is a hanger with a modular design made of two elements: the wall box and a rack with hook. The structure is inspired by the bamboo which symbolizes undying love, safety and well-being in the house in the Eastern philosophy. The product, created by the Russian designers Bogdan Bondarenko and Yuliia Fedorenko, was awarded by the jury “for the ease of use, versatility of additional functions and inspiration to the morphology of the vegetation”.   The naturalistic perspective inspired also Arborem, the project of Davide Mazza, student at Politecnico of Milano, winner for the Student category. The structure of this free-standing hanger in solid wood can be divided into three main areas: three legs for the base, the central node and branched arms, to recall the sinuous shape of a tree. Simplicity and sense of proportion are the reasons given by the jury in the evaluation of the project that fully meets the Porada style.   Distinguishing factors in assessing the works have been the originality, the degree of innovation and pursuit of new design solutions related to the processes typically used for solid wood, the experimentation with materials and surface finishes, the capacity of projects to define and anticipate scenarios of functionality and innovative concepts in the use of wooden furniture and contemporary furnishings, with particular regard to typological, technological and morphological decisions.
The jury was formed by Roberto de Paolis (POLI.design), Bruno Allievi (CEO Porada), Tiziano Allievi (Partner Porada), Ramon Reyes Antonio (Head ofi Ramon R. Antonio Architects, Manila), Atsushi Hirata (Associate Senior Interior Designer of DSGN design, Johannesburg), Andrea Castrignano (Interior Designer), Michele Lupi (Editor of Icon Design), Francisco Rueda León, (Owner and General Manager di Oboe), Arturo Dell’Acqua Bellavitis (Politecnico di Milano).
A great success for the 2016 edition of the Contest: 427 submissions, 228 in the Professional category and 199 in the Student category. Numerous submissions by Italian designers, but also on the international side: Russia, Iran, Ukraina, U.S.A., Finland, Poland e Venezuela, just to mention few of the nations involved.

The appointment for the launch of 2017 edition of the Competition will be during the next Salone del Mobile in Milan. 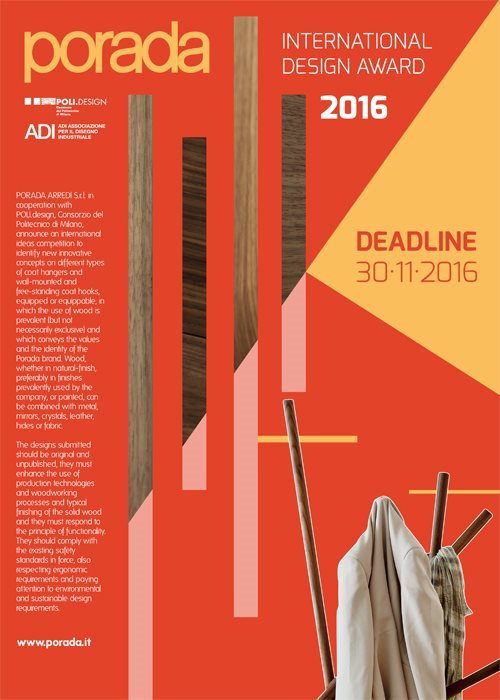